B - The Underwater Bubble Show @ Shubert Theater | Kids Out and About Fairfield County, CT 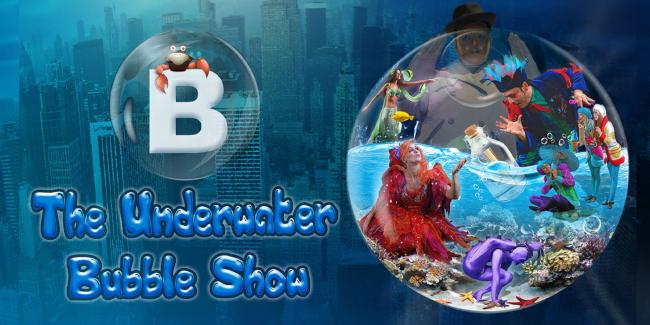 B - The Underwater Bubble Show follows the unexpected journey of Mr. B in the colorful underwater world of Bubblelandia.
Click here for more information about this activity

This show was created to tour the world for adults and children without barriers, especially language. The show is rich in many elements of theater that work without speech including mime, puppetry, physical comedy, and state-of-the-art special effects. Kindled from childhood classics like Alice in Wonderland, The Little Mermaid, and Peter Pan, this show is a modern fairy tale with one major twist: each classic tale represents the journey of a child who grows up and learns something.

Mr. B is an average office worker who feels pressed by a thousand things to do in a world that seems too fast. When he discovers a little aquarium that appears like magic inside his briefcase, he becomes enchanted by the wondrous underwater world full of seahorses, dragon fish, starfish, mermaids, and lots of bubbles! It is a mystical place where he can sit back, relax, daydream, and enjoy life while experiencing a juggler in a huge plastic ball and dancers and acrobats playing as small colorful fish. Mr. B is performed by a skillful mime exaggerating his transformation from stressed out worker to blissed out wonder.

The latest laser technologies, massive LED screens, snow cannons, soap bubble tornadoes, theatrical fog, gigantic smoke rings, smoke-filled soap bubble machines, optical illusions, and many other surprises enrich the show. These elements make for a truly immersive “underwater” show. Add to that technology the work of Enrico Pezzoli and Dace Pecoli, two of the foremost bubble artists in the world. The pair have collaborated on countless projects since joining forces in 1998, including the opening ceremonies of the 2014 Olympics in Sochi.

All Ages Adults & kids together