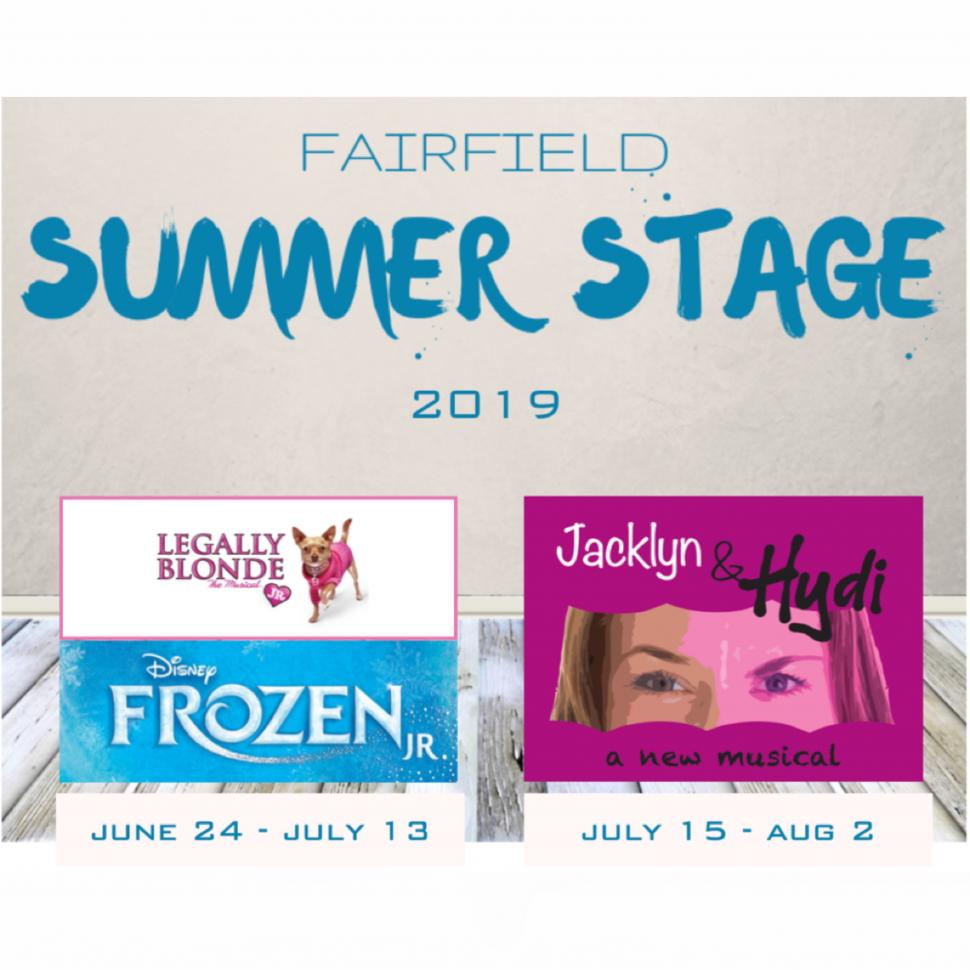 Fairfield Summer Stage is a comprehensive immersive theatre experience for young actors, supported by a professional creative staff of directors and designers at the Fairfield Museum in downtown Fairfield, CT. Session 1: June 24-July 13
Click here for more information about this activity

We will mount a full production of a musical, starting with the initial audition and followed by a multi-week rehearsal process, culminating in a performance where family and friends can enjoy your hard work from the audience. No previous experience required!

About the Shows:
Frozen Jr (Session 1, grades 1-6): Frozen JR. is based on the 2018 Broadway musical, and brings Elsa, Anna, and the magical land of Arendelle to life, onstage. The show features all of the memorable songs from the animated film, with music and lyrics by Kristen Anderson-Lopez and Robert Lopez, plus five new songs written for the Broadway production. A story of true love and acceptance between sisters, Frozen JR. expands upon the emotional relationship and journey between Princesses Anna and Elsa. When faced with danger, the two discover their hidden potential and the powerful bond of sisterhood. With a cast of beloved characters and loaded with magic, adventure, and plenty of humor, Frozen JR. is sure to thaw even the coldest heart!

Legally Blonde Jr (Session 1, grades 6-10): Based on the award-winning Broadway musical and the smash hit motion picture, Legally BlondeThe Musical JR. follows the transformation of Elle Woods as she tackles stereotypes, snobbery and scandal in pursuit of her dreams. When Elle's boyfriend, Warner, dumps her and heads to Harvard, claiming she's not "serious" enough, Elle takes matters into her own hands, crafting a showy song-and-dance personal essay and charming her way into law school. Befriending classmate, Emmett, and spunky hairdresser, Paulette, along the way, Elle finds that books and looks aren't mutually exclusive. As Elle begins outsmarting her peers, she realizes that law may be her natural calling after all.

Camp meets Mon-Fri from 9:30am-3pm. Drop-off is in between 9-9:30am, pickup is between 3 and 3:30pm. Please note no drop-offs earlier than 9am are available, and pickups after 3:30 are subject to a $25 late fee (to pay the staff member who must stay late). All rehearsals and performances will be at the Fairfield Museum, 370 Beach Rd. in Fairfield.

To get more information and sign up, go to:
https://www.fairfieldcenterstage.org/summer-stage

370 Beach Rd
Fairfield, CT, 06824
United States
See map: Google Maps
Contact name:
Christy McIntosh-Newsom
Email address:
info@fairfieldcenterstage.org
Click for more information
The event has already taken place on this date:
07/13/2019
Time:
9:30am-3pm
Price:
Cost: $900 Per 3-week session (pay-in-full after signup, or pay $250 deposit) After May 1, 2019 the deposit is non-refundable (with the exception of if the program is unforeseeably canceled). If you choose not to pay in full at this time you will receive an invoice for the balance prior to the final payment deadline. available discounts: Sibling Discount: Save $100 for each additional sibling per session (i.e. two siblings would pay $1,700 ($900 + $800)). Can be stacked with 'both session' discount! Both Session Discount: Save $200! Sign up for both sessions and pay $1,600 (regularly $1,800). Can be stacked with sibling discounts.