Jonathan Kruk's One-Man "A Christmas Carol" | Kids Out and About Fairfield County, CT 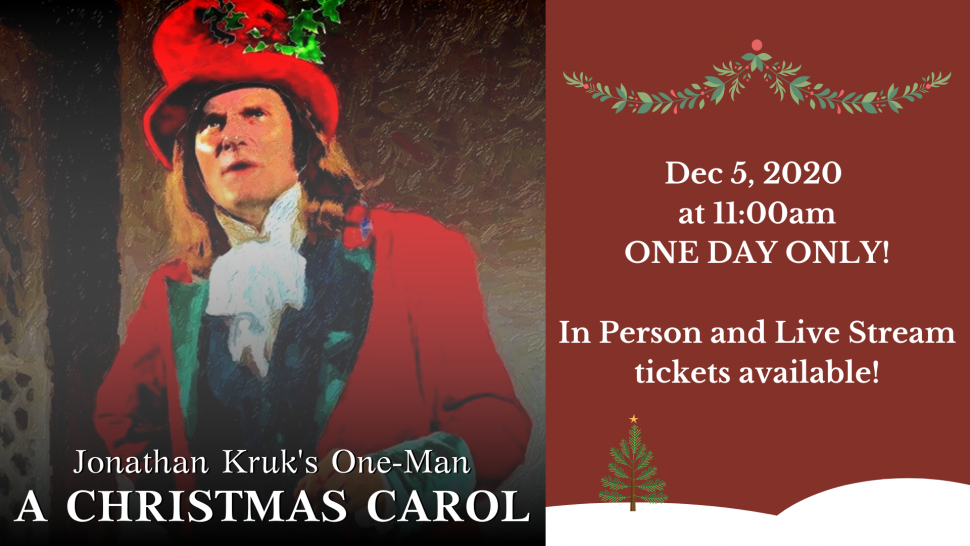 Music Theatre of Connecticut, Fairfield County's professional award-winning theatre company, welcomes Jonathan Kruk’s one-man performance of A Christmas Carol. The show runs one animated hour and using a treasure trove of voices to create over thirty characters, Jonathan Kruk is immediate, intimate, and imaginative. A Christmas Carol will run one performance, both in person and via live stream, on Saturday, December 5th at 11:00am.
Click here for more information about this activity
Please help us keep this calendar up to date! If this activity is sold out, canceled, or otherwise needs alteration, email mindy@kidsoutandabout.com so we can update it immediately.

Transforming into Ebenezer, Bob, and Marley, complete with period garb, lively dialogue, and characters created by concise gestures and expressions, Kruk employs his legendary eloquence. This is not a set scripted piece told from memory.  This is an audience inspired blend of theater and storytelling.  It is filled with quotes from Dickens’ original but alive with spontaneity in each show. Tom McCoy, a noted Broadway accompanist, provides far more than background music. He blends traditional Christmas carols noted in the story with original ambient motifs. Further, he delivers an amazing range of sound effects all gleaned from an electric pipe organ, and one rusty chain. Tom opens by engaging the virtual viewers with a spirited "Guess the Carol?" contest.

Jonathan Kruk is a Master Storyteller, known for his solo shows of "A Christmas Carol" and "The Legend of Sleepy Hollow." He's starred as Historic Hudson Valley tale-teller for twenty years. Kruk's performed this extraordinary solo show at the Union County Performing Arts Center, Rahway, NJ, Saint Vincent College, Latrobe, PA, the Tompkins Corner Cultural Center, Putnam Valley, NY, the Bradley Theater, in Putnam, CT, and in many schools, libraries, and churches. He's been featured on CBS Sunday Morning, The Today Show, The Travel Channel, and the BBC. He has eight award-winning recordings, and two books, “Legends and Lore of Sleepy Hollow and the Hudson Valley,” and “Legends and Lore of the Hudson Highlands.”