The Maritime Aquarium at Norwalk Review--Page 2 | Kids Out and About Fairfield County, CT

The Maritime Aquarium at Norwalk Review--Page 2 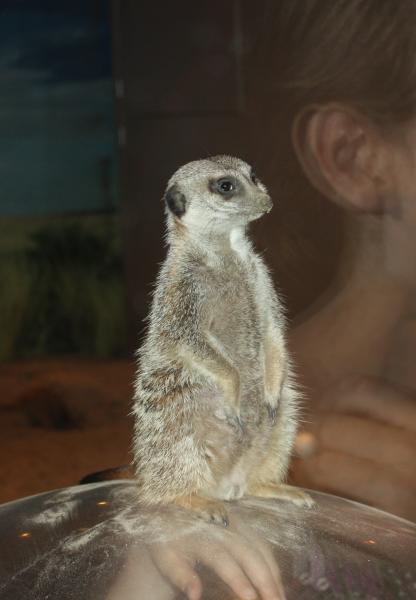 An exhibit that will be in place until February 2012 is Meerkats. With a tunnel for kids that takes them into the middle of the action, the meerkats at the aquarium were "so cute", as my nine year-old stated. They did, run, jump, and literally go through hoops. The kids loved sitting in the exhibit watching the action all around them. At one point a meeerkat was even on top of them. I must admit that it was only after seeing this exhibit that I started watching Meerkat Manor.

The seals were a pleasure to watch. We paid attention to the seal feeding times posted next to their habitat and made sure to come back in time to watch. The handler gives interesting information about the seals. During feeding the seals do cute tricks. The seal exhibit has a special glass wall with a little amphitheater around it to watch the seals swim under water. It is a great place to sit and the side closest to the aquarium with a view above water will give the best location for watching the seals eat. 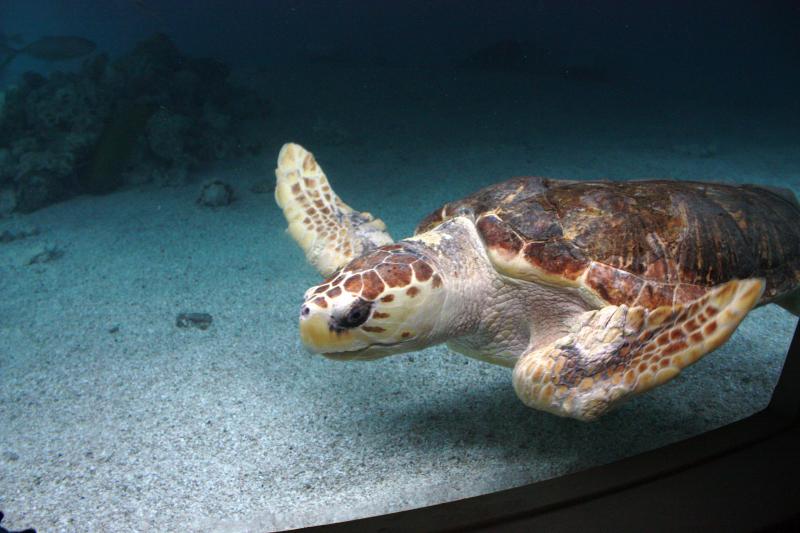 The Maritime now has an animatronic dinosaur display which is new since I was there and will be there all summer. The robotic creatures are nicely detailed with an adult and child. They move! Be aware that this can startle some children. Certain children may want to know in advance that the dinosaurs will move. They can even control one and see the inner workings. A great way to start talking about technology along with the science. The dinos are in a few different areas of the museum and are well-lit (not spooky).

Not only did I like the name of this exhibit because my kids relish getting to say that to me in the card-game, Fish, but also because my husband likes to get out fishing occasionally. My three year-old, along with many other kids up to ten years-old, were playing captain and fishing on the boat display. My eldest daughter enjoyed watching the enormous fish tank from the observation deck. In my opinion the view from up top wasn't as good as through the windows in the side of the tank, but all of my kids liked looking into the tank from above better. There's an educational movie and more. 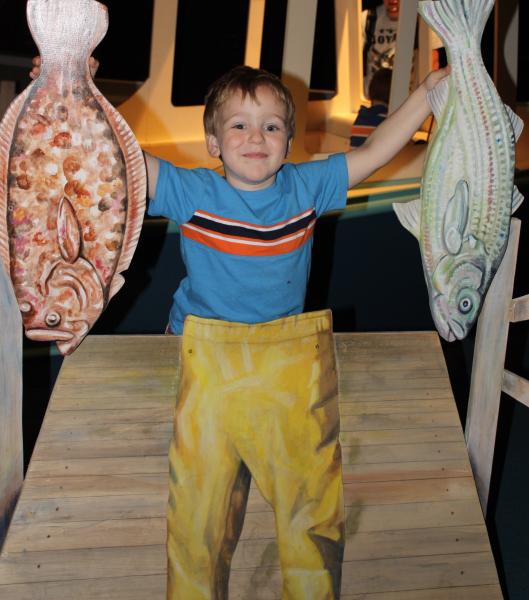 Don't do what I did and miss the Frogs! exhibit. The frogs are located upstairs next to the elevator. I took the stairs to to start off our walk through the aquarium. The pictures on the aquarium's Flickr account show colorful and just plain weird-looking frogs.

Perhaps it’s because otters are frisky. Maybe it’s just the splashing. Though most likely it’s because they look cuddly. The river otters are a huge hit with the kids. My kids will usually sit and watch them while they swim and climb over and over again.

The touch tank offers lots of wet and some slimy things for the kids to touch. The Aquarium staff makes sure they are the only ones handling the animals and there are rules about not taking animals out of the water so they stay healthy.

We saw how much mucus a moon snail makes. My nine year-old touch the bottom of a horseshoe crab because of the example of the aquarium staff member and her gentle encouragement. Everyone touched the shell. There was also a crab and a conch. As they explored we learned where a horseshoe crab has eyes and what a conch egg casing looks like. 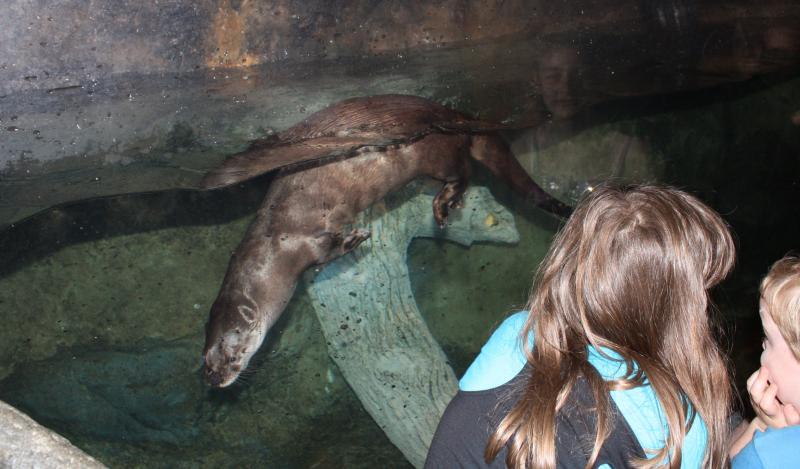 The shark tank is in a darkened room with raised seating. It’s actually an open ocean tank with species other than sharks, but I’m doing this review for parents, so it’s the shark room.  We watched the sharks circling their tanks for a long time. Mostly they stayed up at the top of the tank, but we saw them in the middle by waiting a little while.

After the sharks we watched the jellyfish swim. The circular jellyfish room with its tall, vertical tank is a place I could sit in and relax. We listened to the music and were memorized by the translucent jellyfish.

The giant loggerhead turtles were the last of the main aquarium exhibits. Across from the tank is a display describing how mother turtles bury their eggs and how the baby turtles crawl toward the water. The turtles swim serenely. They are the size of my three year-old. 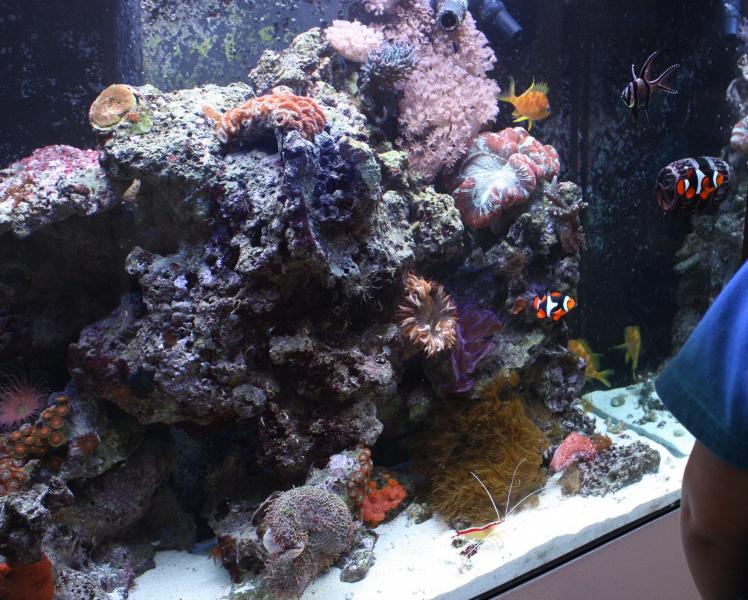 The Marine Lab had some of the cutest sea creatures in my opinion. There were baby jellyfish no bigger than the eraser on a pencil.  Baby seahorses were on display, too. We enjoyed watching the anemones in the tropical tank and the three year-old immediately found “Nemo”.

After checking out the camouflaged flounder, the stingray touch pool was enjoyable. Though only my eldest actually touched the rays, each of the kids enjoyed watching them swim. We spent some time there enjoying them swim around.

Next to the ray tank you will find an old fog horn displayed. My kids never seem to get tired of talking into one end and hearing how the shape of the horn amplifies it. I always point out the model ships to my kids. They are so detailed. Not only fascinating (along with the artwork displayed) to look at for hints about sea travel of days long ago, they are also remarkable for their craftsmanship.

Above the Marine Lab, where the elevator lets off onto the second floor, are a couple of different exhibits. There will be a dinosaur dig where kids can move sand and uncovers a plastic dinosaur skeleton. There is also the Ocean Playspace area specifically designed for five and under.

Kim McNeill is the editor of KidsOutAndAbout.com's Fairfield County site.