P&P Live! Suzanne Slade | MARS IS with Ari Espinoza | Kids Out and About Fairfield County, CT 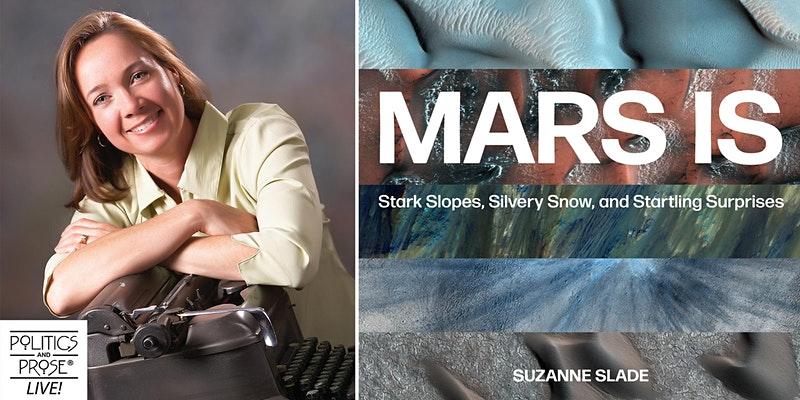 Suzanne Slade discusses her new non-fiction book MARS IS: STARK SLOPES, SILVERY SNOW, AND STARTLING SURPRISES with Ari Espinoza of HiRise at Politics and Prose Bookstore.
Click here for more information about this activity
Please help us keep this calendar up to date! If this activity is sold out, canceled, or otherwise needs alteration, email mindy@kidsoutandabout.com so we can update it immediately.

In 2005 a rocket carrying the HiRise (High-Resolution Imaging Science Experiment) camera was launched into space on a special mission. Seven months later the powerful camera reached the orbit around Mars capturing magnificent photos of the mysterious planet that amazed and intrigued scientists. The photos showed a dynamic place that is anything but boring and stagnant! Sand dunes, cliffs, canyons, and volcanos make up the extraordinary landscape of Mars and the images from HiRise, which NASA is still receiving today, show that the planet is ever changing and awash in a tapestry of colors and textures.

Please join us for a lively conversation with author and former rocket engineer Suzanne Slade about her new book Mars Is: Stark Slopes, Silvery Snow and Startling Surprises. With its mixed typeface of simple yet bold statements combined with detailed STEM content, the book is a great entry into the topic for both younger and older children. During the event, Suzanne will lead us through the extraordinary photos taken and share her expertise in the field of space and engineering. Suzanne will be joined in conversation with Ari Espinoza of the High-Resolution Imaging Experiment (HiRISE).

Suzanne Slade, a mechanical engineer by degree, is the award-winning author of more than 100 books, including Countdown: 2979 Days to the Moon, A Computer Called Katherine, and Daring Dozen: The Twelve Who Walked on the Moon. Before beginning her writing career, Suzanne worked at McDonnell Douglas Space Systems in Huntington Beach, Calif., on Delta rockets, Titan rockets, and the Delta-Star spacecraft. While at MDSS, she worked with engineers who helped create the third stage of the Saturn V rocket, which launched the Apollo Moon missions. She lives near Chicago.

Ari Espinoza is the media contact, outreach lead, and content producer for HiRISE at the University of Arizona. He is also the coordinator of HiRISE’s Beautiful Mars Project which shares information about Mars in many languages to people around the world.

Each purchase of Mars Is: Stark Slopes, Silvery Snow, and Startling Surprises will come with a signed bookplate, while supplies last.

Click here to support Politics and Prose by purchasing Mars Is: Stark Slopes, Silvery Snow, and Startling Surprises and other titles by our featured author.