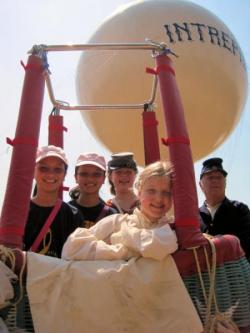 I love living history museums, because the “just look and don’t touch” mandate has been thrown out the window at these attractions, and kids can have a great time simply by being kids. How fortunate for us that one of the country’s leading, largest living history museums is located in the Finger Lakes region of New York State!

Genesee Country Village and Museum, located in Mumford NY, stretches across 700+ acres and has almost as many buildings open to the public as in Colonial Williamsburg. Within those 19th-century stores, houses, barns and other buildings, gathered from all corners of New York State and rebuilt piece-by-piece, are engaging and entertaining interpreters who put a face on history.  Not only will your children learn all sorts of interesting facts (i.e., a case with 215 sheets of tin, used to make Paul Revere lamps, weighed 90 pounds), they’ll get to smell, touch and taste history.

When we were at the Museum for their July 4 celebration, a young boy visiting the Livingston-Backus house was invited to heft the heavy wooden panel that is placed on the baking stove when it’s in use. (Did you know that water was sprinkled on the bricks and the door to help bake the goods?) Dorothy, the interpreter who portrays the kitchen’s cook, let the boy and his older sister pump water into the sink using the new-fangled water pump that made the kitchen state-of-the-art during the 19th Century.

Of course, the first place we headed was over to the field where the Museum was exhibiting their latest acquisition: The Intrepid, the only existing replica of the first hot air balloon—filled with helium, not hydrogen, of course.

We had a short conversation with Rodney, Jim and Ed, Genesee Country Village’s balloonists who shared that hot air balloons were first used for surveillance and reconnaissance under Abraham Lincoln during the Civil War. Unfortunately, we weren’t able to go up, because the wind was blowing at 30 mph just above the trees, although barely a breeze registered on the 93° fields where we stood.  But the balloonists invited the four girls to hop in the basket - which would normally carry a balloonist, a telegraph operator and an artillery man - for a photo op.

While visiting The Intrepid, we ran into Debra Ross (KidsOutAndAbout's publisher) and her daughters who were dressed in Civil war costumes ready to perform in a musical event at the Village as part of the Excelsior Fife & Drum Corps. Later, we saw the girls in the Museum's annual Independence Day Parade.

While waiting for the parade, we stopped by the tinsmith’s barn where the tinsmith was working on a Paul Revere lantern that takes about three weeks to complete.  Next stop… the Romulus Female Seminary where it cost $8 per semester to attend. If Mom and Dad wanted their daughter to also receive an arts education, they’d have paid an additional $8.  My daughters decided they preferred pencil and paper to the soapstone on chalkboard that was used in 1855, when the school was built.

Genesee Country Village & Museum has a variety of Special Events. We’ve gone to the Laura Ingalls Wilder Days and the National Silver Ball Tournament, which were both great events for families.  Genesee County Village and Museum also hosts other activities such as a Civil War Re-enactment, an Old-Time Fiddlers’ Fair, a Lobsterfest, a Spirits of the Past Theatrical Presentation leading into the end of October, and more.

Although the July 4 Celebration prompted event-specific activities such as a parade, concerts, a sack race and a pie-eating contest that might not normally take place, there are always plenty of fun activities for kids. Stilts, croquet, and the pioneer village’s animals (that can be petted) are some of the favorites. But the real magic of the place is the sense of stepping back in time and making discoveries about a different, older way of life from the people, activities and architecture that make history unfold before your eyes. 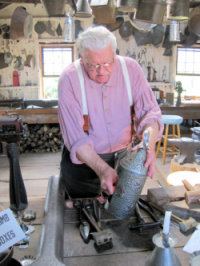 A few things to know before you visit:

Genesee Country Village and Museum is located at 1410 Flint Hill Road in Mumford, NY and is open May 14 through October 16, Tuesdays through Fridays from 10 AM to 4 PM and Saturdays, Sundays and holidays from 10 AM to 5 PM. The museum is closed Mondays, except Memorial Day, July 4, Labor Day and Columbus Day.

Genesee Country Village and Museum is an experience that will create great memories for the entire family.

P.S. You may also want to investigate their Explore and Learn Programs that feature Day Camps, Scout and School Programs as well as adult programming.