The Maritime Aquarium at Norwalk | Kids Out and About Fairfield County, CT

The Maritime Aquarium at Norwalk 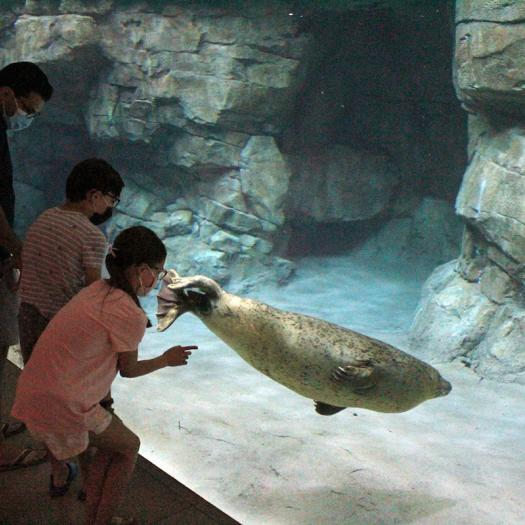 An aquarium devoted to Long Island Sound, with sharks, seals, sea turtles, jellies & more, plus marine-science programs for schools & the public, including hands-on cruises onto the Sound.
Click For More Information

Learning doesn't stop just because school is out.  That's when FUN learning begins!

The Maritime Aquarium offers educational programs year-round:  through in-person and virtual marine-science programs for schools (and homeschoolers) during the school year, and also prorgams during the spring-break week of most local school districts and also through single- and multiweek summer camps.

The age-appropriate hands-on activities engage students in ways that demonstrate how exploring our world can be fun and exciting.

The Maritime Aquarium Summer Camp offers a selection of topics and sessions for ages 4 to 12. Plus, teens 13-15 can participate in an in-depth three-week apprentice experience in our Animal Husbandry and Education departments.

The Maritime Aquarium features some 7,000 marine animals of 300 species, including harbor seals, 9-foot sharks, curious river otters, loveable sea turtles, pulsing jellyfish and more – all native to nearby Long Island Sound and its watershed.  These animals serve as ambassadors both for their species and the Sound’s natural environment. Guests' intimate encounters are the heart of the learning experience ... and the inspiration for new generations of Long Island Sound stewards.

Hands-on experiences include: an Intertidal Touch Tank with sea stars, crabs and other shoreline creatures; a Shark & Ray Touch Pool with graceful creatures that don’t mind a stroke on the back; and Jiggle A Jelly, letting guests do something they’ve been told all their lives NOT to do: touch live jellies.

The Maritime Aquarium is proud to have accreditation from the Association of Zoos & Aquariums (AZA),, the organization that sets the top standards for animal care and visitor safety at zoos and aquariums. The AZA accredits only those zoos and aquariums that meet the high-
est standards. Fewer than 10 percent of animal exhibitors in North America licensed by the USDA are accredited by the AZA.

The Maritime Aquarium opened on July 16, 1988, as “The Maritime Center.”  The name was changed in 1996 to better reflect the increasing number of marine life exhibits.

Once an old warehouse in disrepair, The Maritime Aquarium has become an anchor for the revitalization of South Norwalk and an economic engine for the entire region, welcoming visitors each year from all 50 states and abroad.

More than 80,000 school children are taught by Maritime Aquarium educators each year, during field trips to the Aquarium and also in their school classrooms during visits by Aquarium Traveling Teachers. Virtual/online programs are offered to the public too!

The Maritime Aquarium’s research vessel, R/V Spirit of the Sound, cruises Long Island Sound more than 300 times per year, all year round, with public and student groups.  Educators onboard introduce participants to the marine life of Long Island Sound and collect scientific data on the animals and water conditions. A 64-foot catamaran, R/V Spirit of the Sound was the country's first hybrid-electric research vessel.

The Maritime Aquarium takes its mission to educate children and adults seriously.  We couldn’t do it without the support of admission revenues, members, and philanthropic organizations.

Built to replace the IMAX Theater (lost to a federal railroad bridge placement project), the Aquarium’s new 4D Theater opened in January 2021 and takes the guest experience to new dimensions – literally. Thanks to 3D glasses, images pop off the two-story screen, while environmental special effects – such as scents, bubbles, wind, snow and mists – create a fully sensory experience. Two different movies – each about 10 minutes long – play each hour.